Under the Sea…Some 300 Million Years Ago

Walking through the Mountain America Museum of Ancient Life, you will see hundreds of fossils. At every turn, you can peek over the railing or examine through the glass the preserved remains of plants and animals that lived millions of years ago. Though dinosaur bones are what most people think of when they hear the word fossil, fossils can be several different things – including the shells and teeth of animals that lived long before the dinosaurs existed. Because of tectonic plates, erosion, and other water processes, paleontologists have even found fossils of animals that lived under the sea. Let’s take a look at a few prehistoric aquatic invertebrates that you will come across on your walk through the museum.

Ammonites were shelled cephalopods that went extinct about 66 million years ago. These spiraled animals ranged in size and shape, some with coils that straightened out as they got bigger. They were born in tiny shells and built new chambers as they grew. Once a new chamber was built, they would “move” into that new chamber and seal off the old one with walls known as septa. These sealed-off chambers were filled with gas or fluid that could be regulated to control movement and buoyancy. The walls they built strengthened the shell and stopped it from being crushed by water pressure. Ammonites moved by jet propulsion, pushing water through a funnel-like opening to propel themselves. They likely ate crustaceans, bivalves, small fish, and plankton. They were likely eaten by mosasaurs, ichthyosaurs, and other larger predators. Because they are such common fossils, we know what their shells looked like, but parts like the arms and soft body we have pieced together with what we know about living cephalopods like octopuses and squid to create a fuller picture. 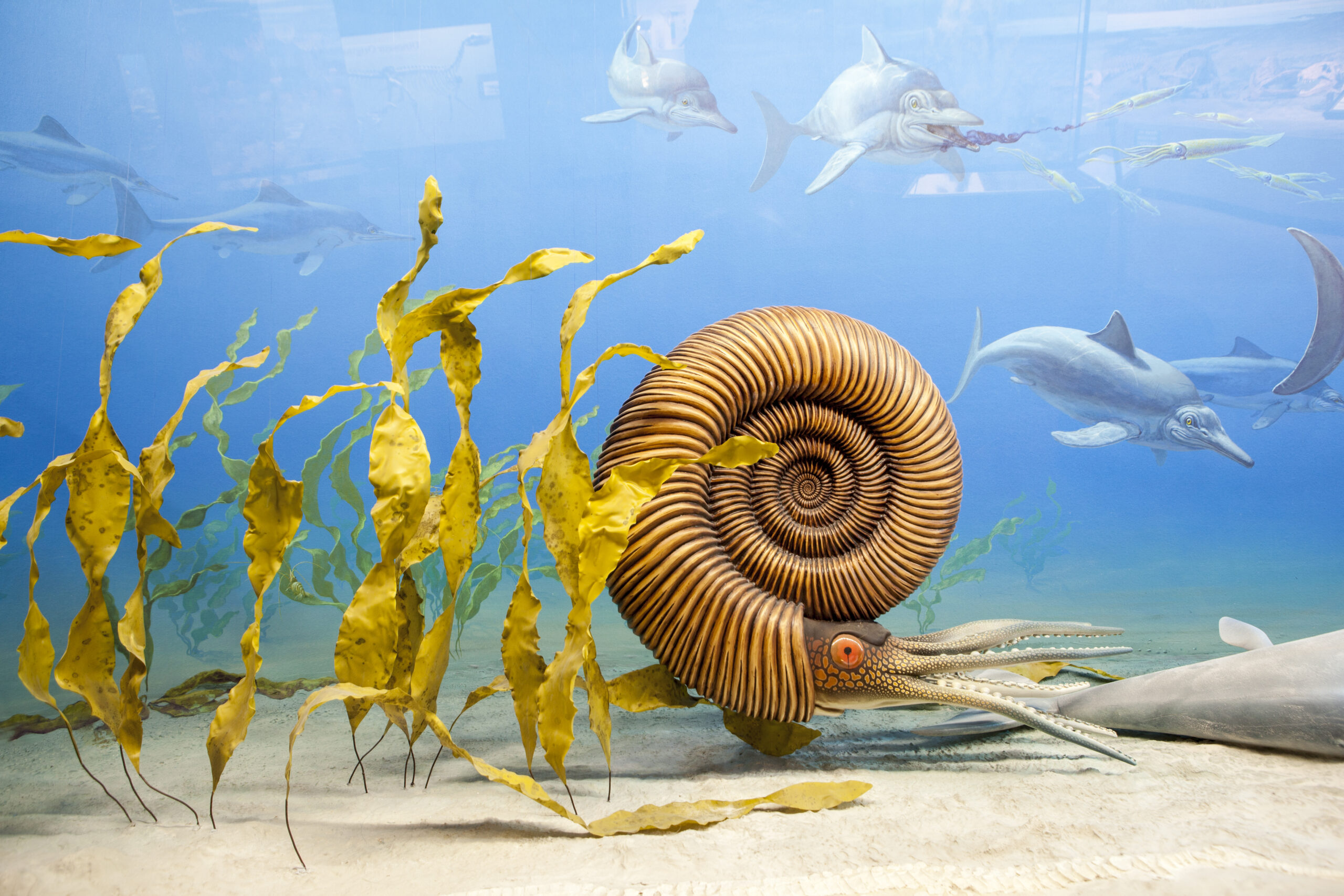 Brachiopods are animals, belonging to their own phylum, Brachiopoda, that have lived for at least 600 million years and are still alive today. Most brachiopods are permanently attached to the sea floor by a fleshy stalk, but few can attach themselves directly to soft sediment or aren’t attached to anything at all. They are virtually defenseless – their shells, surrounding their organs, were their only protection against predators. The shell is comprised of two calcite valves. These valves are hinged together by a pair of ventral teeth or dorsal sockets. The space between the two valves is home to a fleshy, hollow organ with long twisted arms and filaments (the lophophore). The hair-like organs (cilia) attached to the filaments beat fast and bring in food-bearing water. The shell opens and closes to allow this water to pass through it.

Trilobites were arthropods that went extinct about 250 million years ago. Most were 3 to 6 centimeters long, but some could be as long as 60 centimeters or as short as a few millimeters. Their soft body was covered by an exoskeleton divided into the cephalon (head shield), thorax (middle, abdomen), and pygidium (tail shield). Each section was divided into segments that were fused together (apart from the thorax) to allow the animal to roll into a ball and protect itself. They had a pair of jointed antennae protruding forward from beneath the cephalon and had rows of jointed limbs on each side of their body. Most trilobites had compound eyes with several separate lenses, giving them a wide field of vision in every direction. Trilobites shed their shells when they outgrew them, so a large number of trilobite fossils are molted exoskeletons.

Crinoids, also known as “sea lilies”, are flower-like echinoderms (like starfish or sea urchins). They appeared 300 million years before the dinosaurs. Their branching arms (brachia) sway around the top of a cup-like structure (calyx) containing the body of the animal. Those arms sieve passing water, using the sticky mucus-covered tube feet attached to them to trap any food that drifts by. The tube feet move food down toward the mouth, located at the center of the calyx surface. The calyx, where digestion occurs, is made of polygonal plates and attached to a stem anchored to the seabed. The stem also consists of plates, but they are disc-like and stacked on each other. There are crinoids still living today, but you are more likely to find a crinoid fossil that a living animal. 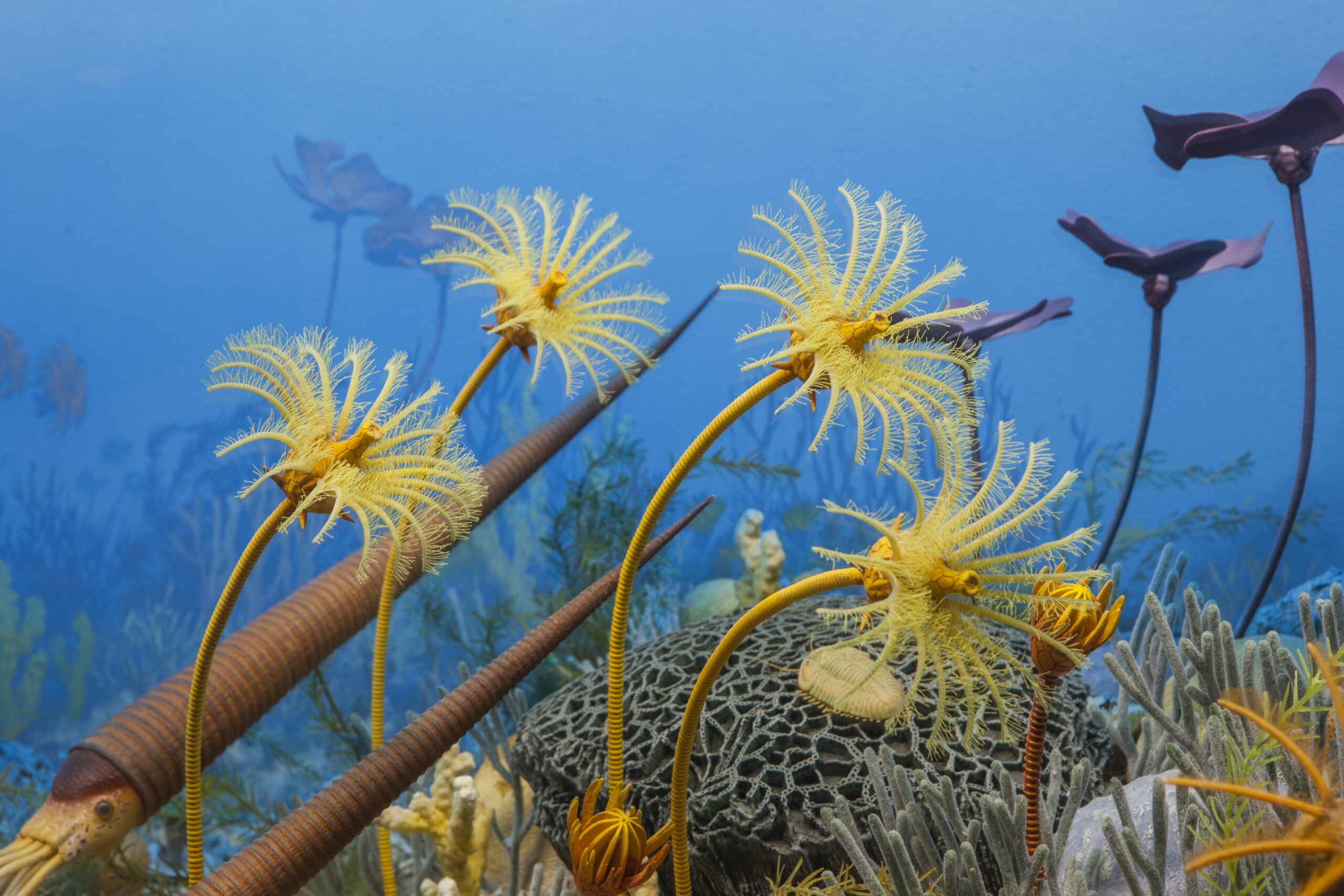 Fossils, from the towering T-rex to small, shelled animals that lived in ancient seas, help teach us the history of life on Earth millions of years ago. They give us insights into life now and allow us to see how the modern world and the prehistoric world are still connected.